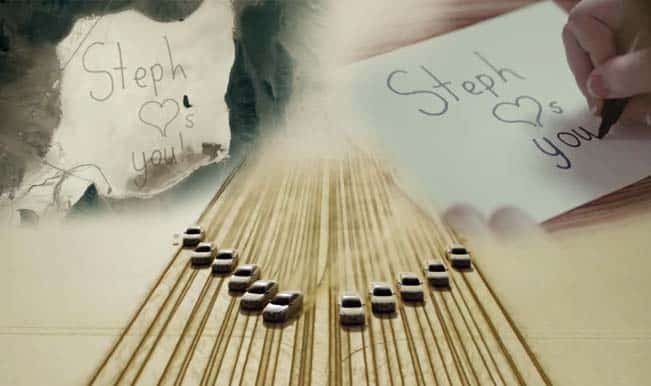 Hyundai has launched a heartwarming campaign titled “New Thinking” A Message to Space, where Hyundai allows a young girl named Stephanie to talk to her dad who is an astronaut.  His upcoming mission will force him to be away from her for seven months, creating an emotional gap between the two.  Apart from the time and effort put in, Hyundai needs to be commended for their corporate and social responsibility in giving back and doing good.  It is always a plus when a company really shows that they care about their customers.  They understand the value of making a good car, but also being a good company!

How Hyundai actually managed to send a message to space is even more heartwarming (see below).

Hyundai Motor Company’s latest global campaign entitled ‘A Message to Space’ a total of eleven cars from their flagship Genesis line to create the world’s largest tire track message that could be read from outer space.

In relation to the scope of what needed to be done to actually make the message happen Hyundai themselves had this to say:

In order for Stephanie’s message to be read clearly from such a great distance, experts had to strategically identify optimal locations based on numerous geographical and meteorological factors. After several expeditions throughout various locations, and analyzing weather data, Delamar Dry Lake in Nevada was selected as the most optimal destination.

A total of 11 cars from Hyundai’s flagship Genesis line were used to create 30 meter-wide letters over the desert. Spanning 5.55km, nearly twice the size of New York City’s Central Park, Stephanie’s message was soon brought to life and generated a response from her father.

If that’s not impressive, then I don’t know what is!  This is amazing how much went into this one, out-of-this world message happen!  Big props to Hyundai and Stephanie for creating this amazing campaign, and not to shabby on winning a Guinness World R  ecords

Check out the “New Thinking” video from Hyundai below:

Read A little more about Hyundai:

More information about Hyundai Motor and its products can be found at: http://worldwide.hyundai.com or www.hyundaiglobalnews.com

Rick Jeffrieshttp://RickJeffries.com
Speaker, Writer, Trend-setter, and Founder of Ventures Marketing.
Previous articleI’ll Take the Brute Force of the Dodge Challenger Hellcat
Next articleVolvo and Avicii Team Up For an All New Campaign and Music Video

Locked Out of Your Car? 3 Ways You Can Get Back In