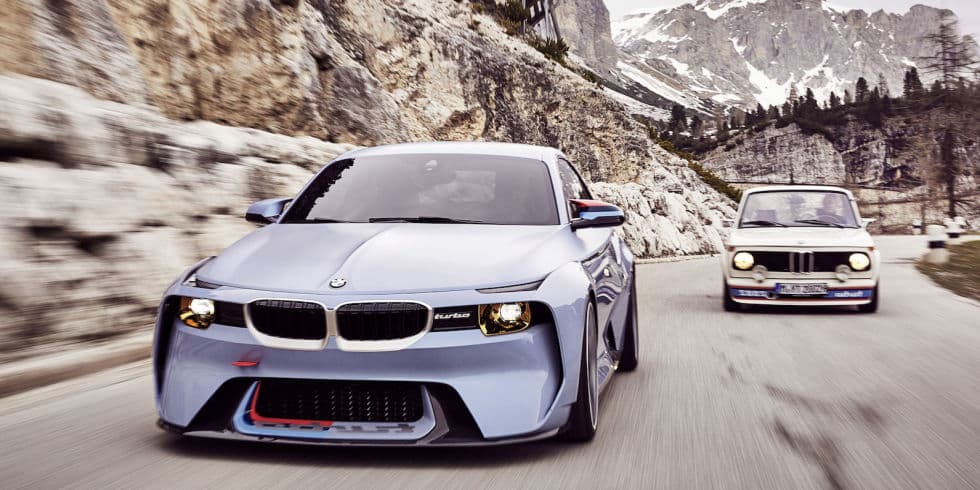 BMW decided to pay homage to one of their greatest cars, the original BMW 2002.

The original 2002 inspired the German car company to continue making a their infamous 3 series model that is still used today. We’ll be reviewing how the 2002 Homage Concept compares to the original.

BMW was the first car company to make a turbocharged car that came out of production in Europe.  That car was the 2002 Turbo. So to honor the BMW 2002 Turbo, they decided to turbo-charge the Hommage as well.

The BMW 2 series is said to have the most resemblance to the original BMW 2002. BMW based the Hommage model off the M2, the top-of-the-line of the 2 series models. The tail lights of the BMW 2002 Homage almost match the original’s with their curved, 4-angles, and timeless look.

One factor that makes the all new Hommage great, is the aerodynamics. The front spoiler under the grille provides a decent amount of added down-force to the car. What’s super amazing is that they have managed to retain features of the original BMW 2002, a car that came out 50 years ago. For BMW to modernize its technology and keep its classic look is nothing short of why they make The Ultimate Driving Machine!

Aerodynamics is also found on other parts of the car. If you take a look at both models, you will see a resemblance with the bands that run down the side. The only difference is the aerodynamics provided with these bands. BMW 2002’s Homage uses an aforementioned carbon band that provided greater aerodynamic capabilities for speed and gas mileage purposes.

Now lets get to the fenders for all you car fanatics who love those wheels popped out. Since the original BMW 2002 turbo had its fenders rolled straight out of production, it was only right for the BMW 2002 Homage to have done so as well.

Paint used for the 2002 BMW Homage is completely original. They decided to uses a Space Race Medal paintwork that has both matte and gloss in it to help make a magnificent blue metallic color. For all you M lovers who love seeing the baby blue, navy blue, and royal red colors BMW only provides with M series models, do not worry because these colors are found not only on the front bumper and rear. This BMW 2002 is not only a Homage to the classic but to all BMW fans.

The Shocking Truth About Car Loans: They’re Useful, Easy and Actually Worth It