Interesting Team Dynamics at Play in McLaren for the 2015 Season 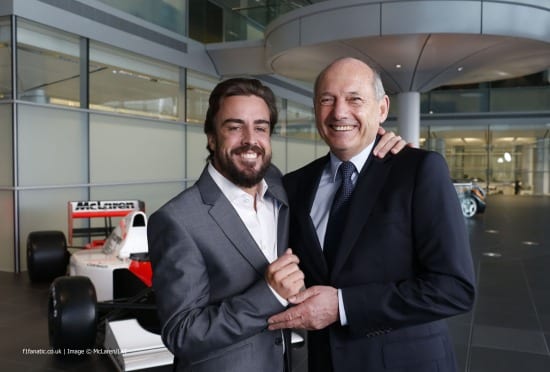 It’s a brave new era for the team down at Woking. Actually it’s probably better to say, it’s a brave old era with the return of Honda engines and a familiar face of Ron Dennis patrolling the corridors. Add to that the return of Spanish driver Fernando Alonso and you could say that McLaren’s Formula 1 team is looking at the past for inspiration for the future. With Alonso signing a multiple year deal along with British driver Jenson Button, the immediate future seems set for the 2015 season. However, whilst the pictures, articles and assurances of success have come thick and fast out of Woking, there’s a couple of interesting inter-team dynamics at play here. Did anyone else see this happening? Fernando Alonso back at McLaren with Ron Dennis in charge posing for photos and trying to forget what was probably the most explosive and poisonous break up of team and driver in Formula One history. I think the very fact that Alonso and Dennis are willing to work together again shows how desperate both of them are to secure wins. Lets not forget how this relationship soured though. Dennis had brought the double world champion to the team for the 2007 season, safe in the knowledge that he had secured one of, if not “the” best driver in Formula 1. No one expected his rookie teammate to match his speed, let alone beat him, but that’s exactly what Lewis Hamilton did. Yes there were tensions at the USA Grand Prix when Alonso was seemingly annoyed that the team didn’t radio Hamilton to tell him to let his pass, however the relationship changed dramatically in Budapest. It was qualifying for the Hungary Grand Prix and Hamilton wrongly stopped Alonso getting a clean lap by refusing to let him pass and Alonso responded by blocking Hamilton in the pitlane, causing him to miss his last chance of a flying lap. Unsurprisingly, Dennis was furious and he had some rather serious words with the driver in which Alonso responded with threatening to go to the FIA with the “spygate” scandal. Even though Alonso immediately retracted his comments and regretted mentioning it, Dennis told the Formula One’s governing body, the FIA, himself. This eventually led to a rather large fine for the team and having all its constructor’s points removed for the year. To say this caused a little friction between them would be a massive understatement. Alonso was also adamant that the team was favouring his rookie teammate over him in the fight for the title. A British team favouring a British driver who’s career had been funded by the team wasn’t a far fetched idea and the seed was planted in Alonso’s head throughout the season.

“Well, right from the start I’ve never felt totally comfortable. I have a British team mate in a British team, and he’s doing a great job and we know that all the support and help is going to him and I understood that from the beginning.” – Alonso (2007)

The year ended with neither of the drivers winning the championship and Alonso left at the end of the year under a dark cloud. No one at that time could ever see the two working together again. We are now many years removed from that dark time in McLaren’s and Alonso’s history, but it would be naïve to think that time heals all wounds. Yes, both Dennis and Alonso have admitted to mistakes being made and regret about the way things ended, I just find it difficult to believe that these two extremely competitive characters can just forgive and forget. Alonso has admitted himself that the lure back to McLaren was the return of the manufacture Honda to Formula 1, but what if the engines they produce are sub-standard? We’ve seen numerous times at Ferrari in the past years that Alonso has no problem calling out the team if the equipment they give him is poor. Will the new Dennis be able to handle this? Because the old one certainly wouldn’t have.

Both of these men are winners but each have their flaws and each will have their character tested in 2015. The question is, can they get along well enough to not have it interfere with the ultimate goal of race wins and Alonso’s elusive third championship? They are not stupid men. They know in order for this to work, both will have to work together in positive circumstances. 2015 is a big year for both of them.

Perhaps one of the most interesting dynamics of the team will be between the drivers. Jenson Button is known throughout the grid as being one of the most reliable and smoothest drivers in Formula One. He’s probably the best driver on the grid in changeable conditions as his touch and feel of the car ultimately stems from his smooth driving style. If the car is there for him, he’s a force to be reckoned with. What he can’t do is hustle a bad car to an unexpected points finish. His smooth sweeping driving style means if there is too much oversteer in the car, he finds it difficult to adjust and subsequently his laptime drops. Despite this, Jenson beat Lewis Hamilton in points scored over the three years they were teammates because he is just so damn consistent and reliable. Hamilton has been hailed by Martin Brundle and other F1 commentators as the fastest driver on the grid, so beating him over three years is no mean feat and further proof that Jenson fully deserves his 2009 World Championship.

What Jenson is also good at is leading the team and keeping a positive attitude. Even in times of stress, he rarely criticises the team and seems to get on well with all of his teammates. At McLaren he’s had Hamilton, Perez and Magnussen and there has been very little friction between them. I’m sure there have been difficult moments between the drivers during the season but ultimately the team has maintained a healthy atmosphere during winless times. Jenson brings a calmness and togetherness to McLaren, which will be extremely important in the upcoming season with a seemingly divisive and fiery character like Alonso joining the team. It’s probably the reason why Button was preferred over Magnussen for the drive in 2015. Jenson also has experience with Alonso in a team setting as the Spaniard was test driver for Renault in 2002 and actually took Jenson’s Renault seat before the 2003 season.

So how does Alonso get on with his teammates? Well he seems to get on as well as you can with your direct competitor. Recently he’s had Massa and Raikkonen as teammates and there’s been minimal friction between them. What’s important to remember though is Alonso has completely dominated them on track and this had led to harmony off it. The last time the Spaniard was seriously challenged on track was with Hamilton in 2007 and we all know how that ended.

The health of the relationship between the drivers will ultimately come down to one thing. Performance. In my opinion, Alonso is the most complete driver in Formula One since the days of Senna. To drag that Ferrari around and make it a competitive car has been nothing short of a miracle. To be within the grasp of 2 world championships with the Scuderia is nothing short of a miracle. If he is as good as we all think he is, he should beat Jenson in 2015. If he does, I fully expect the team dynamics to stay healthy. Jenson is the consummate professional and I very much doubt he’ll cause any friction or problems knowing that the team will ultimately suffer if the drivers aren’t working as one. Plus, if Alonso is the best driver in Formula One, there is absolutely no shame in being beaten by him. This is the most likely outcome of the 2015 season but don’t expect it to be domination by Alonso. This is Jenson’s team and he has the benefit of years of experience with McLaren, not to mention a strong relationship with his former team turned engine supplier Honda.

The friction will only come between the drivers if Jenson is beating Alonso consistently. A higher points finish and a higher qualifying position is expected every now and again, especially at the start of the season as Alonso looks to get settled. However, repeatedly beating Alonso on the track is a sure fire way to get him riled off it. I find this situation a little harder to envision though. The McLaren car of 2015 will probably be raw and will need good direction of development to see it progress to where it needs to be. With new engines from Honda and a new Aerodynamic direction with the hiring of Red Bulls Peter Prodromou, chances are that the cars balance and setup will need some getting used to. Not to say that a Prodomou made car won’t be balanced, but throwing in a brand new Honda engine with totally different torque and feel from the 2014 car will no doubt take some getting used to, for the drivers and for the team.

This ultimately hands Alonso the advantage. He’s a driver who is known to be able to take an unbalanced and twitchy car and hustle it through the corners with an aggressive but pinpoint accurate driving style. He’s ability to adjust to the cars faults and still get the most from it is probably his greatest strength whilst Jenson’s greatest weakness is his inability to adjust to balance changes, particularly if the car starts to get twitchy on corner entry. The different driving styles between the two will no doubt play a part in the direction of development of the car also. What will be most interesting though is if the McLaren car is balanced right from the start of the championship. This will probably give Jenson a slight upper hand and it will be interesting to see how Alonso responds. Either way, it’s going to be interesting viewing this team dynamic throughout the season.