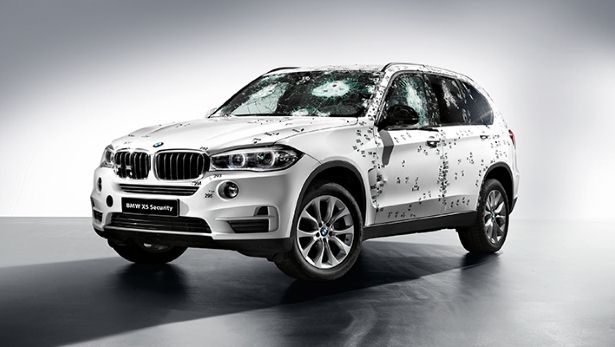 What would be the modern day Michael Corleone mob boss type car? The all new bulletproof BMW X5. Well the official name is the BMW X5 ‘Security Plus’, a name well deserved.

The armored vehicle is built around a special-passenger cell, a type of armor used to stop the penetration of piercing rounds. What rounds you ask? Try AK-47 rounds, and absolutely no damage done to the interior. It is also wrapped in high-performance steel mouldings and pannels. And what surrounds these panels are sealed joints. There is a special coating that covers the inside of the glass called polycarbonate to help stop those rounds. It all sounds expensive, but to an important figure, it is probably worth their life. But the performance for this car is impeccable, something that isn’t really expected of the X-series.

In order to manage all the weight the car holds, BMW upgraded the car severely from its stock model. Its upgrades are chassis, brakes, and ECU system. The engine, 450 bhp V8 turbo. The drive system, the infamous BMW X-Drive (AWD).

BMW showed this vehicle off at Moscow, who figures right? Have it for a mob boss I say or as BMW claims, “violent assault, kidnapping, and organized crime.” I thought protection vehicles were cars made by the county they’re used in (Crown Vic and America).

BMW even offers more ‘protection’. BMW will personalize the car and add extra security requirements such ass LED strobe lights in the radiator grille, roof beacons, and even a siren system.

Staff
Previous articleBMW i8: In a Class of its Own
Next articleFT-1 Concept Car | Toyota’s Double Take

Best Safety Tips for Sharing the Road With Motorcycles